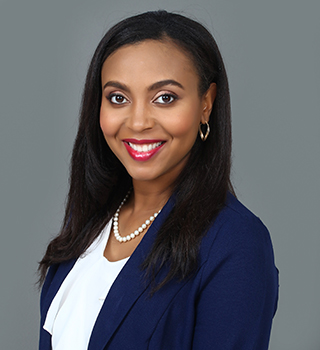 Kerry-Ann Heavens is an attorney-at-law, specializing in corporate finance having acted as counsel in substantial private equity deals, debt financing arrangements, mergers & acquisitions, and other transactions since being called to the Jamaican Bar in 2010.

She joined the team at GraceKennedy in 2017, providing legal advice and oversight for the companies in the GraceKennedy Financial Group, including First Global Bank. She previously worked in the commercial department at one of Jamaica’s leading law firms Kerry-Ann Heavens is a graduate of the University of Cambridge, where she obtained a Master of Corporate Law degree as a Chevening Scholar. She also holds a Certificate of Legal Education from the Norman Manley Law School; a Bachelor of Laws Degree as well as a Bachelor of Science Degree in International Relations and Public-Sector Management (both with first class honours) from the University of the West Indies.

Kerry-Ann Heavens has contributed to the development of national policies and legislation whilst serving on various national boards and committees. She is a current member of the Jamaica Bar Association.