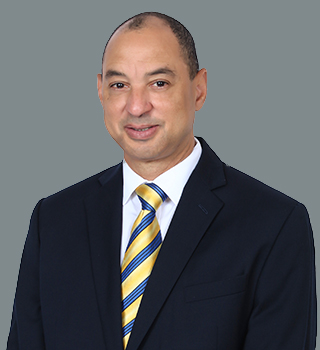 Don Wehby became Group Chief Executive Officer of GraceKennedy Limited on July 1, 2011. Prior to this appointment, Mr. Wehby was Group Chief Operating Officer, a position he took up when he re-joined the company in 2009.

Mr. Wehby first joined GraceKennedy Ltd. in 1995 as Group Finance Manager, and in 1997 was promoted to Deputy Finance Director and appointed to the GraceKennedy Board of Directors. The following year, he was appointed Group Chief Financial Officer and in 1999 undertook the additional role of Chief Operating Officer for the Financial Services Division. He also led the Group's local and international expansion in banking, investments and insurance services. He has directed the listing of the company in Jamaica, Trinidad & Tobago, Barbados and the Eastern Caribbean Securities Exchange sited in St. Kitts. Under his leadership, GraceKennedy acquired 100% ownership of First Global Bank Ltd

A Fellow Chartered Accountant, Mr. Wehby gained his early auditing experience at Touche-Ross Thorburn. He holds both a Bachelor of Science (Hons.) and a Master of Science degree in Accounting from The University of the West Indies and has completed an Advanced Management College certificate course at Stanford University. Mr. Wehby is married with three children. He is an avid cricket fan and a member of the Kingston Cricket Club.